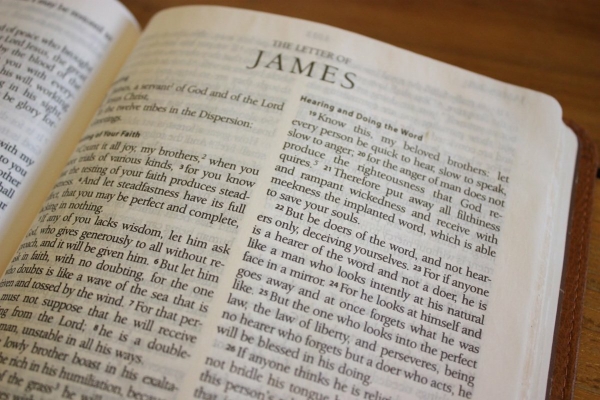 But most of all, my brothers and sisters, never take an oath, by heaven or earth or anything else. Just say a simple yes or no, so that you will not sin and be condemned.

I have never testified under oath, but that’s not really the issue James is raising here. In our legal system, people used to place a hand on the Bible when swearing to tell the truth in court. I doubt there are many Bibles in many courtrooms these days, but witnesses are still required to promise that their testimony is truthful. That’s a good thing for the wheels of justice. We should expect that everyone will be honest and forthright in criminal or civil proceedings that could result in someone’s life being forever changed by the verdict. Telling the truth matters – in court and everywhere else we go. Honesty, as the saying goes, is the best policy, and so is being direct and clear with all our words, as opposed to being deceitful, manipulative or misleading.

It’s ironic that this verse has often been misconstrued and inconsistently applied, as though James’ words were hard to understand. James is exhorting followers of Jesus to speak the simple, straightforward truth. We shouldn’t feel the need to swear by some celestial being or to put on the pretense of taking an oath in order to convince people that we are being honest. Our words should be clear enough and our motives pure enough that people will believe what we say without the added theatrics of swears, vows, oaths or lavish gestures. Just tell the truth. Say yes or no. Unfortunately, some have twisted this simple verse into a prohibition against taking oaths in court or against saying certain words that may sound like a ritual of swearing by something unholy. James didn’t have modern court proceedings in mind when he wrote these words; instead, he almost certainly had in mind Jesus’ words from the Sermon on the Mount (Matthew 5:34-37). Our Lord cautioned against making vows “by heaven” or “by earth,” telling us, as echoed by James, to simply say yes or no. Again, just tell the truth without all the drama.

So, let’s set aside the issues of courts and oaths, and let’s focus on what matters in our daily lives: tell the truth and speak with integrity. Maybe the best test of whether you are consistently living out this verse is how other people hear and respond to your words. Do people generally trust what you say? Do people receive your words with confidence or with skepticism? If you’re not sure, that’s probably not a good sign. We live in a culture drowning in cynicism and half-truths where some people intentionally blur the lines between fact and opinion, between reality and fiction, between honesty and deception. Followers of Jesus should be known as people who tell the truth. That’s one way we love our neighbors, and it’s essential to leading a life of moral and spiritual integrity that reflects the character of Jesus who is “the way, the truth and the life (John 14:6).”

Father, all Your words are true and good. Thank You for revealing Your wisdom in scripture and for helping me to follow Your ways. Teach me to speak the truth, even when it’s hard. Help me to use my words to lift others up and to bring honor to the name of Jesus. Amen.
____________________________
Pastor Mike Mirakian